Yes, they come from China.

And, yes, the story I saw came from none other than Reuters International.

That’s right, the annual rite of spring in Donyang, Zhejiang province includes harvesting gallons of urine from little boys’ rooms at grade schools to use as soaking/cooking liquid for what’s known as  “virgin boy eggs”.  Young schoolboys in Donyang are trained to urinate in special collection buckets placed in school hallways, instead of heading to the loo. Teachers tell students that if they are feeling ill, they should not use the special buckets. Thank goodness. We wouldn’t want anyone to unwittingly ingest infected bodily fluids.

They’re called “virgin boy eggs” because the urine is taken only from boys under the age of ten. No one knows why, except that’s just the way it’s always been done.

The eggs are then cooked and sold by vendors on the street for about a quarter apiece, and folks in Dongyang can’t get enough of them. People look forward to the annual ritual, so much so that the odor of boiling pee is known there as “the scent of spring”.

And of course, there are many health benefits purported to be gained from eating these little stinkers. Such claims include heat stroke prevention, improved blood circulation, and overall invigoration. The eggs allegedly have a salty taste.

There’s a really descriptive article (with stomach-churning photos) over at Very Vietnam.  Here’s the link to the Reuters article, too. 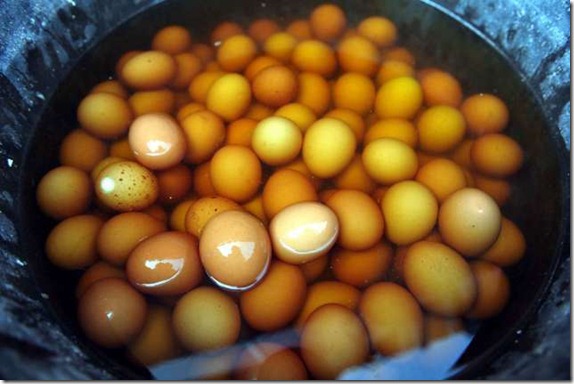 3 thoughts on “Disgusting Food Item of the Week: Urine-Soaked Eggs”

Send an email to wendaliciousradio@gmail.com, and I’ll read it on the air!

Add this URL to your podcatcher