Just wanted to remind everyone that tomorrow night (Monday, April 23 from 6-8pm) is the Boys & Girls Clubs of Schenectady’s fundraiser, “A Taste of the Capital Region”.  Thirty-nine professional and amateur chefs will be preparing and serving a wide array of delicious food, and there will be lots of beer and wine to accompany the tastings. Tickets are $50 per person, and all proceeds will benefit the important programs at the Boys & Girls Clubs of Schenectady (a great organization that does great work in the communities that need it most). The event will be held at the B&G Clubs’ Rotterdam Clubhouse, located at 721 Curry Road in Rotterdam. Fifty dollars is a bargain when it comes to fundraisers, especially considering that there’s so much food and drink to be had!

As an added incentive for you to buy a ticket, I will be one of the amateur chefs! I’ll be serving samples of my “Black & White Hummus” – black bean hummus served alongside classic white hummus.

I spent most of today in the kitchen of the B&G Club, making the hummus. It’s amazing how much time it takes to prepare enough food for 200 servings! My hummus recipes take about 15 minutes (tops) to make at home, but it took me FOUR HOURS to make two pans of hummus! The most tedious part was picking the leaves off seven bunches of cilantro. Holy crap that was tedious. But, I think the results will speak for themselves.

The participants will be competing against each other in a few categories:

I was told today that it’s a friendly competition, and that it’s all for fun, but I am in it to win it. Go big or go home!

Seriously, I am excited to be taking part in such a fun event. I hope to see some of you there! Let me know if you’ll be coming, and be sure to stop by and say hello if you do! I’ll share photos of the event on Tuesday.

I’d like to extend a very special thank you to the manager on duty at the Clifton Park Hannaford store yesterday. I needed to buy 40 cans of beans (as well as limes, lemons, and cilantro), and he helped me clear the shelves and was super nice about the whole thing. He even gave me a peek into the back of the store – which was fascinating in its emptiness (a story for another time). Thank you, nameless manager! I’ll make sure to figure out your name and thank you personally next time I’m in the store. 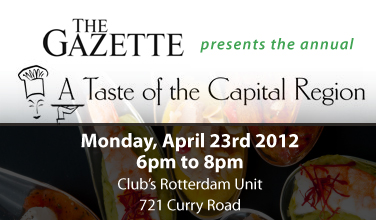 2 thoughts on “A Taste of the Capital Region Tomorrow – Last Chance for Tickets!”