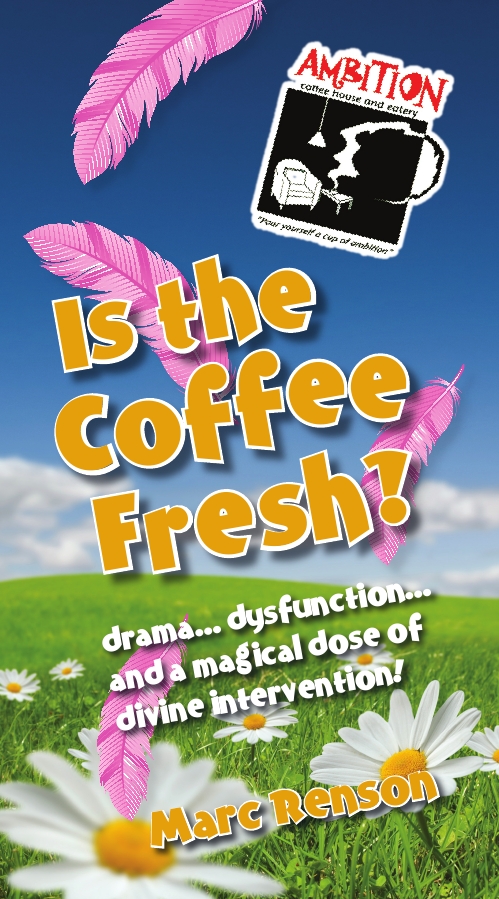 If you’ve ever been to Ambition Café on Jay Street in Downtown Schenectady, then you’ve likely noticed the sandwich on the menu called the “Crabby Marc” (and if you haven’t been there, you’re missing a great funky little place).  The Crabby Marc is named for Ambition’s owner, Marc Renson.  Upon meeting Marc, you instantly know that the sandwich name is a complete misnomer – there is absolutely nothing crabby about this guy.  Marc is charming, funny, and an absolute ball of energy.  He’s normally cheerful, but today his exuberance is absolutely bubbling over: he’s about to release his first book, Is the Coffee Fresh?, a look at what, in Marc’s words, has been his “magical journey” through the restaurant business.

First, a little back story on Ambition, the restaurant which serves as the focal point (and truly, the central character) of Is the Coffee Fresh? Marc and his partner Greg Salomon opened Ambition in 1999, after spending years looking for a place to set up shop.  They nearly bought what is now the Red Barn in Ghent, but their search for the perfect location brought them to Schenectady.   They happily settled in Downtown, a community which Marc and Greg love and passionately support.  But why a restaurant?   Because it was meant to be, Marc declares.  He’s always loved the business, and at age sixteen, while working at a restaurant, he realized that owning a restaurant was his life’s calling.   He cites a “series of divine coincidences” that brought him to downtown Schenectady, to Ambition, and ultimately to publishing his debut book.   Indeed, the subtitle of the book is Drama, Dysfunction, and a Magical Dose of Divine Intervention.

Marc also credits some of his success to the people whose life stories have motivated him in his journey – among them Madonna, Cyndi Lauper, and Dolly Parton.  In fact, the opening lines from Parton’s 1980 hit “9 to 5” was the inspiration for the restaurant’s very name:

And stumble to the kitchen

Pour myself a cup of ambition…

Lauper (along with comedienne Rosie O’Donnell) will be appearing at Proctors in Schenectady on August 11, and Ambition is one of the show’s major sponsors – Marc’s small way of saying thanks to one of the women whose success has inspired his own.

So, why did Marc write this book, when food memoirs seem to be a dime a dozen these days?  Well, because it’s actually not a food memoir.  “I didn’t write about what happens in the kitchen, because it’s been overdone.  This is not Kitchen Confidential,” Marc assures me, referring to culinary bad-boy Anthony Bourdain’s stomach-churning restaurant exposé.  “I’m taking the reader to the front of the house, and sharing with them the blood, sweat, and tears that go into running a restaurant.  Those stories just weren’t out there.”

Not only does Marc’s book reveal the hard times – like the story of “the a**hole who stole forty thousand dollars from me” – it also dishes out an ample helping of laughter.  Marc is proud of the fact that his book is full of the positive (and downright hilarious) experiences, and doesn’t dwell on the anger and negativity that seem so prevalent in other restaurant books.  “Who doesn’t get mad at work?  I didn’t want to write about the anger.  It’s been done.  This book is really about the crazy people in Downtown Schenectady,” he laughs.

I ask him to tell me his favorite story from the Ambition files.  He recalls a few, before getting to his absolute favorite.  There are the requisite tales of people having sex in Ambition’s restrooms – which has happened on several occasions, Marc tells me, matter-of-factly.  Then there are the many celebrities that Ambition has hosted over the years, due to its serendipitous proximity to Proctors: Tommy Tune, Barbara Eden, Norah Jones, Dennis DeYoung, and the Godfather of Soul himself, James Brown, for whom Marc humbly recalls making a cheeseburger.  But the story that Marc labels as his favorite has ended up being my favorite one from the book as well.  Not to give away too much, but suffice it to say it involves a bachelor party, an absentminded stripper, and a wayward pair of underpants.  You’ll just have to read the book to get the full story.

When asked how long it took him to write Is the Coffee Fresh?, Marc pauses for a few seconds before answering.  “It’s not really finished,” he finally replies. “I still want to add more.  But I actually stopped writing it two years ago.”  Since then, it’s gone through a rigorous editing process, including being scrutinized by Michael Garrett, horror legend Stephen King’s first editor.  Marc readily admits that the experience of publishing his first book, into which he’s poured his very soul, has been a bit difficult to describe.  “Sometimes I can’t believe what’s going on.  I’m so outside of my mind, but so humble at the same time.”

The self-published Is the Coffee Fresh? is scheduled to be delivered into Marc’s hands on June 30, which also happens to be his 39th birthday.  “What a freakin’ birthday present!” he shouts.  “I’m so excited I’m getting nauseous.”

The book will be available to the public beginning on Friday, July 17.  Ambition will host a book-signing party from 6-8pm that night, as part of Schenectady County’s SummerNight event in downtown Schenectady.  Everyone is invited to attend, and anyone who purchases a book will be treated to complimentary chocolate-covered strawberries and sparkling wine (21 and over, of course).

Now that he’s on his way to becoming the literary toast of the foodie world, will Marc be leaving the restaurant business for a career in books?  “I’m still here,” he says.  “I’m not burned out just yet.  I’m hoping people will read the book, and drop by Ambition to say hello.”  And if you do drop by, make sure you enjoy a sandwich from his exciting and eclectic menu.  Perhaps the Crabby Marc?